YEESH.  I've waited far too long to post.  Too much to do and too little time to write about it, I suppose.

Well, one of many projects I'm working on is repainting some Axis and Allies:  Angels 20/Bandits High planes.  I have three Finnish Brewsters I'm redoing as U.S. Marine F2A Buffaloes — also four Russian P-40B Tomahawks I'm repainting as British 112 Squadron aircraft complete with shark mouths (but I'll save pics of those for another post).

First I gave them a base coat of good old Walmart flat white spray paint. 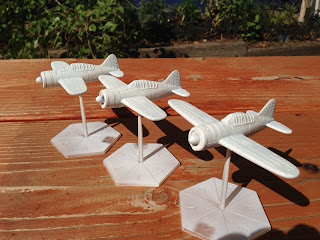 Next, I masked off the underside of each model with some special masking tape (I think it's called Gator Tape, but I don't have it handy to look at the name right now). 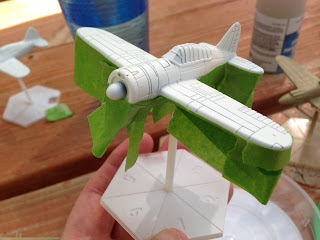 Once the masking was done, I sprayed the top of each plane with Testors flat military grey.  When the masks were removed, I had very nice 2-tone U.S. Marine camouflage. 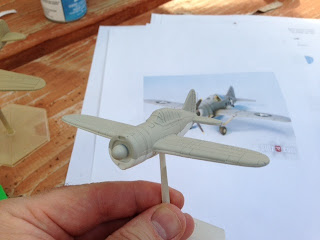 I painted the canopies a light blue and applied some early war U.S. star decals to the wings and fuselages.  I had two sets of decals, but I didn't have enough of either group to finish off all the planes.  So I had to use some from each.   The newer ones had the red dot in the middle of the star, so I just painted over those with flat white craft paint.

The older set was really old — like 20 years old.  When I stuck them in water, some of them started to disintegrate.  It took a lot of fiddling to get them onto the planes in decent fashion.  I was unable to salvage some, so it took a few tries to get the rest of the wings and fuselages covered.  Even then, some of the decals were a little chipped.  I figure they'll add to the "lived in look" of the Marines' trusty old steeds. 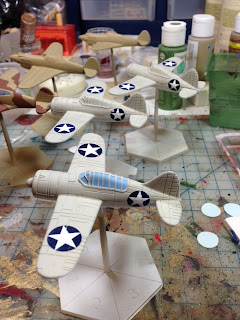 I've played several dogfight games over the years, from the old Mustangs and Messerschmitts to Wings of War.  I have to say I like Axis and Allies' implementation best.  They seem to capture the varied capabilities of the aircraft while still inserting an element of chance into the maneuvers.  They're also the first set of rules I've seen that actually comes close to correctly reflecting the fact that, the faster your plane goes, the wider its turn arc is.

Recently, I downloaded a copy of Too Fat Lardies' "Squadron Forward" — a set of campaign rules for aerial combat.  You form your squadron and then fly a bunch of missions with it.  The twist is that each of your pilots has a different personality and different skills.  Your finest pilot may be a rogue, or your squadron commander a coward.  As near as I can tell the bonuses and disadvantages SF lays out will easily fit into the A&A rules.

So, I have a few ideas for campaigns.  The first is "White Tails" — a squadron of P-39s based on New Guinea.  This should be a challenging campaign as the Airacobras were outmatched by the Zeroes and other Japanese fighters they were up against.  P-39s were only $1.25 apiece on Miniaturemarket.com, so I couldn't pass them up.

The other squadron I'd like to campaign with is a British P-40 squadron in North Africa — hence my repainting the Russian P-40Bs.  I've always liked the Desert Campaign, plus I have a big variety of German and Italian fighters for the Tomahawks to go up against.

More later about the Tomahawks...
Posted by Pouncing Tiger at 9:03 PM 2 comments: